The Warmth of Other Suns: The Epic Story of America's Great Migration by Isabel Wilkerson 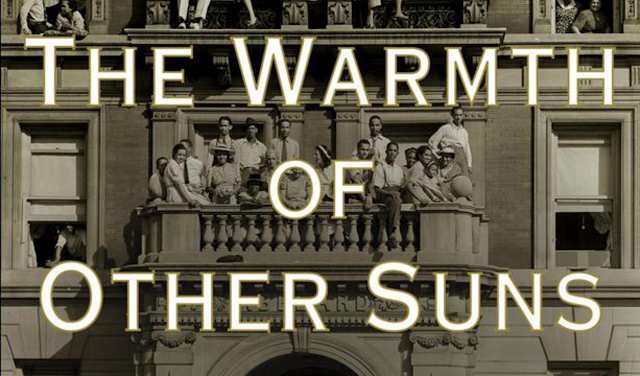 
The Warmth of Other Suns is a skillfully written masterpiece by Pulitzer Prize-winning author, Isabel Wilkerson, detailing what she calls, "the most unreported story of the twentieth century"; the early 20th century migration of African Americans out of the South. In 1910, 90% of African Americans lived in the South. The Great Migration witnessed millions of African Americans relocate from the South to the urban cities of the North and West in search of jobs, an escape of racial prejudice, and generally, a better life. But afterward, a question which remained was, "did they find what they were looking for?"

Wilkerson's book has more than ten years of research to back it up, and it is a voluminous work with more than 600 pages. It is also personally researched, the author having interviewed over 1,200 people. Wilkerson selected three dozen of those people to interview in great depth, and chooses three of those particular stories to discuss within the book.

With a great deal of detail, Wilkerson tells the story through the lives of three individuals from different parts of the South. She discusses Ida Mae Gladney, who left prejudice and sharecropping behind in Mississippi in 1937 for Chicago. She tells the story of George Starling, who was ran out of Florida in 1945, because of his uncontrollable quick temper and left for Harlem, New York. She also discusses Robert Foster, who left Louisiana in 1953 to pursue his medical career and to later become the successful personal doctor for music icon Ray Charles.

This is one of the most compelling books I've read this year and it’s still very popular within the Free Library of Philadelphia. This is ideal book for book clubs of all ages and it did a remarkable job of answering some of my own questions about the migration concerning my own family, who left South Carolina to migrate to Philadelphia. It also explains that not all of the people left the South looking for better opportunity, many were forced out based on racism and the brutal Jim Crow laws. Many even left land and property unattended in the middle of the night just to save their life or the life of a love one. Overall, this book is a classic in the making! Mr.Philly Librarian

NAMED ONE OF THE TEN BEST BOOKS OF THE YEAR BY
The New York Times • USA Today • O: The Oprah Magazine • Amazon • Publishers Weekly • Salon • Newsday • The Daily Beast

Posted by Mr. Philly Librarian at 4:24 PM No comments: