A 2016 Caldecott Honor Book and Coretta Scott King Award winner. The story about Troy "Trombone Shorty" Andrews from Treme neighborhood in New Orleans. This child prodigy was leading his own band at the age of 6. He got his nickname by playing a trombone that twice as long as height. Great read! I love Picture Books depicting African American life !!! #Read ##reading #bookstagram #books #booklover #bookworm #read #bookish #booknerd #bookaddict Mr.PhillyLibrarian

Posted by Mr. Philly Librarian at 2:39 PM No comments: 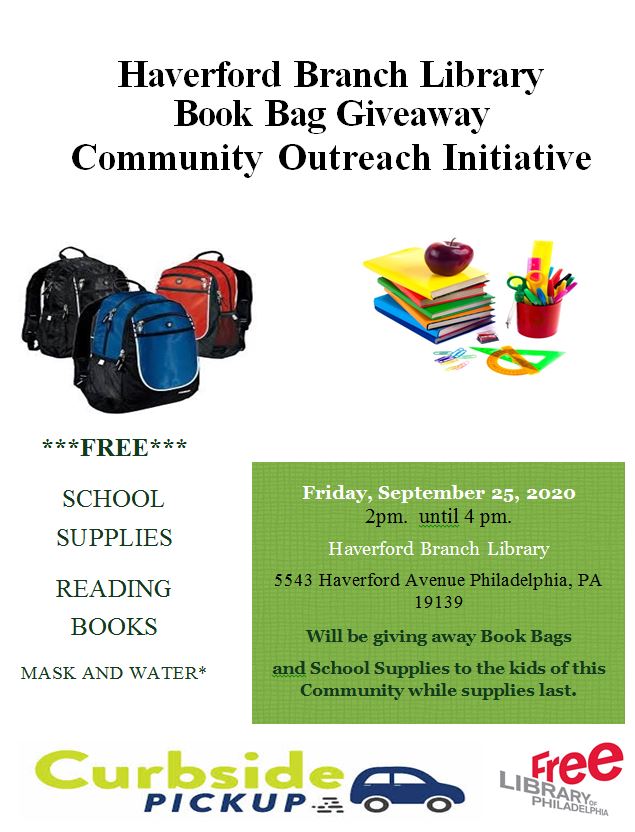 Posted by Mr. Philly Librarian at 1:30 PM No comments:

Harlem Godfather: The Rap on My Husband Ellsworth "Bumpy" Johnson. 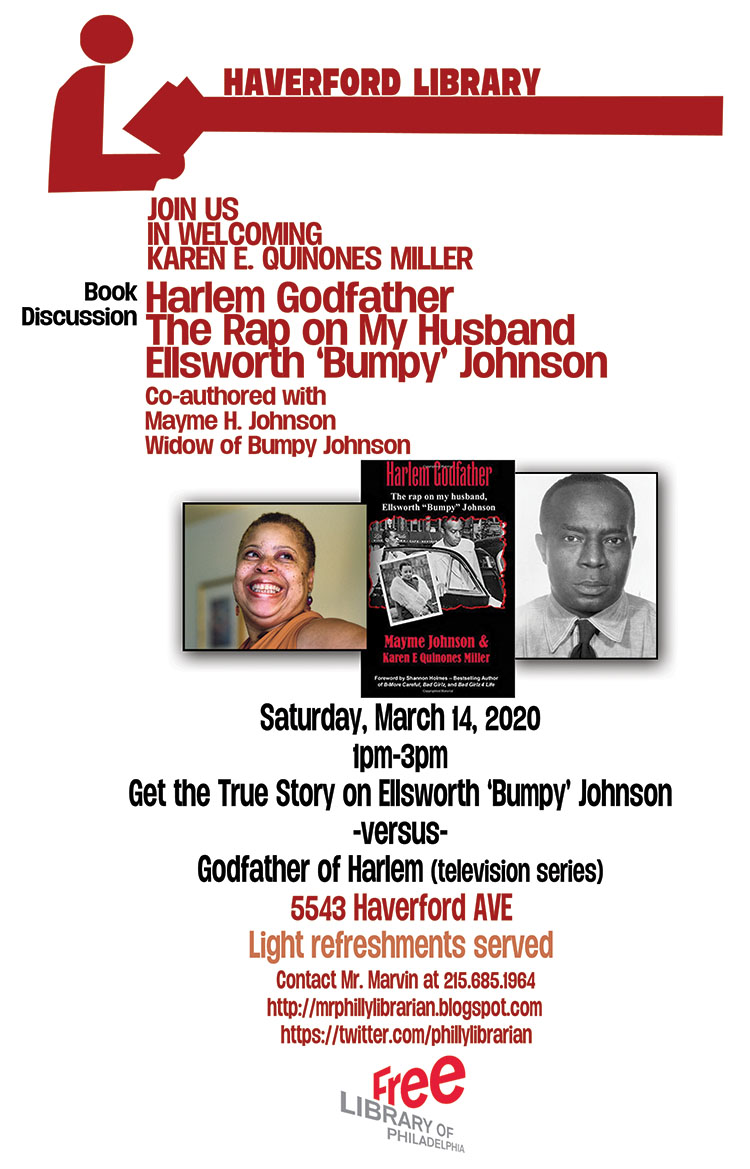 Seed Swap @ Haverford : In partnership with the Philadelphia Seed Exchange 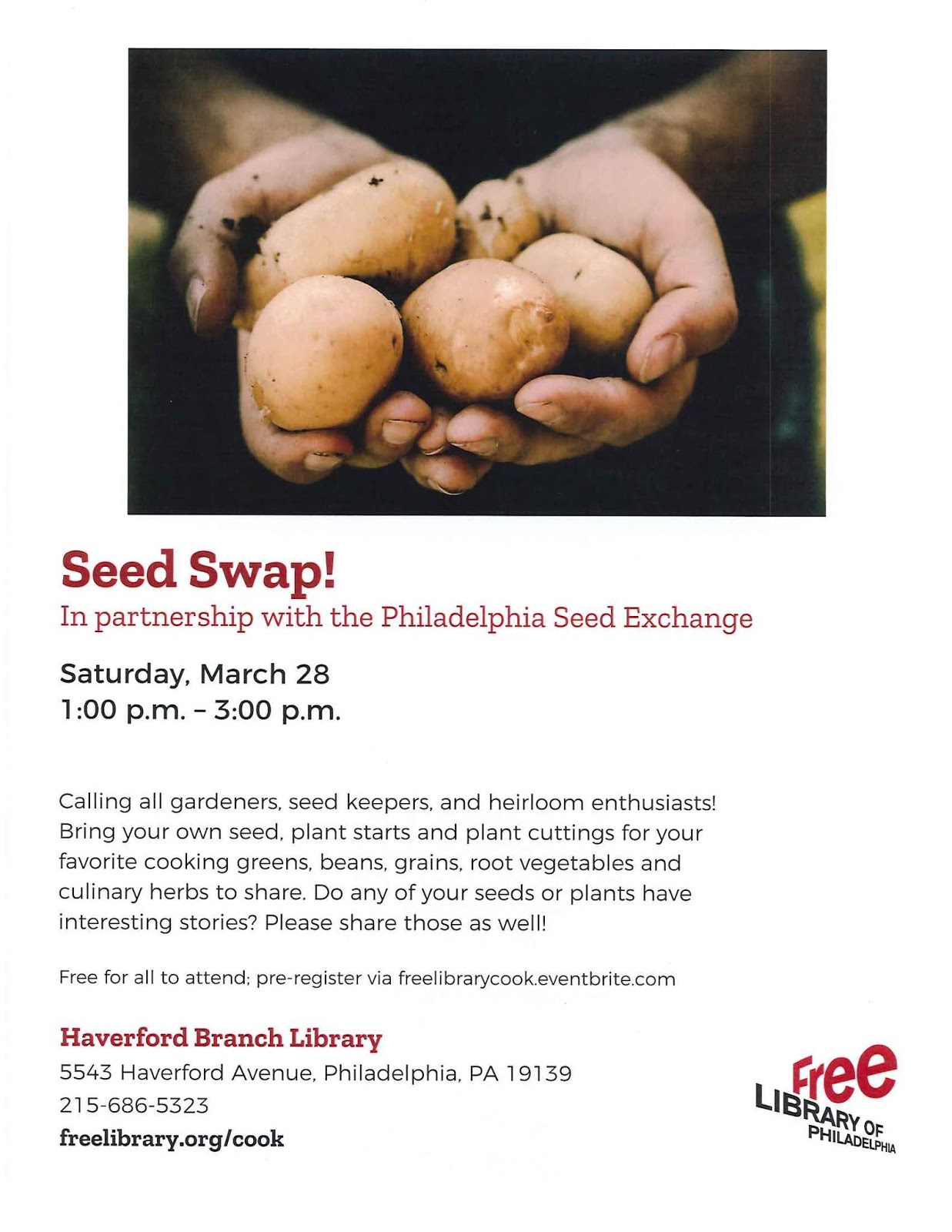 Posted by Mr. Philly Librarian at 11:37 AM No comments:

"In the Margins" Committee 2020 Book Awards 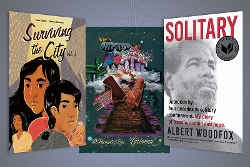 Now in its eighth year, the In the Margins Book Awards committee revealed its top picks in three categories: Fiction, Nonfiction, and Advocacy and Social Justice. The books, published over the last 18 months, appeal to the reading needs and wants of marginalized youth.
This year, the committee selected Surviving the City by Tasha Spillett-Sumner, illustrated by Natasha Donovan (Fiction); When Hip Hop Met Poetry: An Urban Love Story by Tytianna Wells (Nonfiction); and Solitary by Albert Woodfox (Advocacy and Social Justice).
In addition to the three top titles, members selected a variety of titles for their Top 10 list, including self-published works and those produced by major publishing houses.
For the list of Top 10 titles and more about the committee and its selections, see the press release below.
2020 In the Margins Book Awards
FOR IMMEDIATE RELEASE
02/12/2020
Contact: Sabrina Carnesi, In the Margins Book Awards Committee Chair
NEWPORT NEWS, VA.—The In the Margins Book Awards (ITM) committee is pleased to announce their selections for overall top titles and Top Ten List for 2020. In the Margins Book Award selections are inclusive of stories written for youth between the ages of 9 and 21, in the categories of fiction, nonfiction, and advocacy. Many books considered for this award are self-published and from smaller independent publishers. The committee’s charge is inclusive of youth living a marginalized existence, with specific focus on narratives and informational text that address the disproportionality of injustices experienced by BIPOC youth from the historical impact of cultural irrelevance and structural exclusion which often finds them living in poverty, in the streets, in custody, or a cycle of all three.
In addition to reading and discussing a multitude of book titles published over the previous 18 months of the award year, a unique selection experience of the committee is the input received from young adults who have also read and directly shared their opinions on the same book titles. Incorporating the enthusiastic response from youth who live the experiences of our charge is a vital component to generating this annual reading list which was originally intended as a selection tool for librarians who serve youth in juvenile detention facilities throughout the North American continent, and has since spread to community outreach programs and schools throughout North America.
For the first time in its eight year history, the committee has not only selected a story that is representative of Indigenous voices as its top fiction title for two years consecutively, but have generated a Top Ten and Recommended List with an overall total of four titles with authentic Indigenous and First Nation representation. Another first for the 2020 lists is that both top nonfiction and advocacy titles shatter traditional format, with one book written as a memoir-in-spoken-word and the other written as a memoir-in-essay. Our top title selections in each category for 2020 are:
__________________________________________________________________________________
Surviving the City written by Tasha Spillett-Sumner, illustrated by Natasha Donovan, published by Highwater Press (2018), won Top Title for Fiction (YA) . 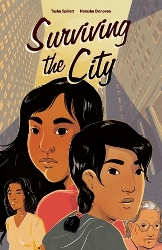 Milkwan and Dez are best friends. Milkwan is Anishinaabe and Dez is Inninew. When Dez disappears after finding out she might be sent to a group home because her grandmother is too sick to care for her, it brings back the memories of the disappearance of Milkwan’s mother. The resilience, cultural, and spiritual support needed by Milkwan to overcome the resurging anguish is addressed in this haunting story that highlights the alarming numbers of missing and murdered Indigenous women and girls. “The committee is very much aware of the crisis that surrounds missing and murdered Native women as one that has been disregarded by law enforcement and federal agencies for generations. With the overwhelming response our committee received from the youth reviews gathered for this title, it is our hope that this novel in graphic form spotlights the disproportionalities of this critical issue to youth throughout the country who are seldom made aware of such injustices, and that it may be transformative in growing the community needed to abate such crises,” said Sabrina Carnesi, ITM committee chair.
When Hip Hop Met Poetry: An Urban Love Story written by Tytianna Wells, cover design by Ashley Cathey, published by Honey Tree Publishing (2019), won Top Title for Nonfiction (YA and Older Teens). 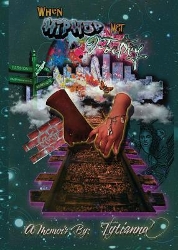 In multiple formats of song lyrics, poetic verse, and journal entries author Tytianna Wells shares her passionate memoir from ages 13 to 19 which looks beneath the surface of a good-girl-bad-boy relationship where she becomes a teen mom who loses her baby to stillbirth before graduating from high school. Tytianna plans to use proceeds from her memoir to fund the Nadia Michelle Scholarship Foundation, an educational support and personal development youth program named after her daughter. After reading Tytianna’s memoir Carnesi shares the committee’s belief that this title can serve as “a catalyst for teen girls who find themselves in similar situations of despair and brokenness to overcome their barriers and continue on a path of healthy growth and development into adulthood.”
Solitary written by Albert Woodfox, published by Grove Press (2019), won Top Title for Advocacy and Social Justice. 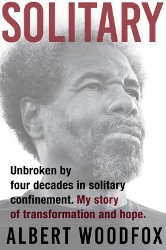 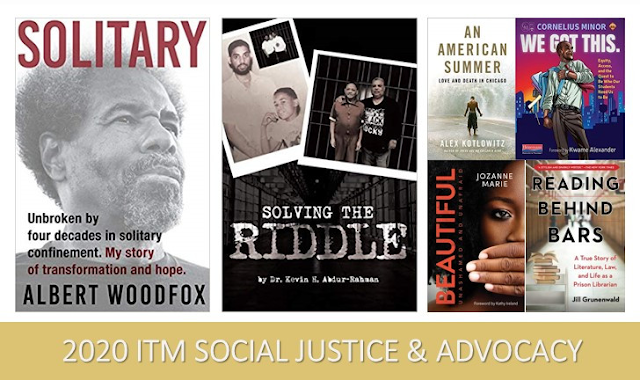 Abdur-Rahman, Dr. Kevin H.  Solving the Riddle.  February 2019.  Page Publishing, Inc. Paperback.   $16.95.  192 pages.  9781644621165.  Older Teens and Adults.  This journey takes you through Dr. Abdur-Rahman’s life as a person condemned for life as one of the biggest drug dealers in Philly, from changing to being redeemed back into society after a long prison term and rehabilitation as a major society behavior changer in Philadelphia during the late 1980’s to mid 1990’s . In Solving the Riddle he discusses in detail how to avoid the pitfalls of an ill society, its negative influences, and dysfunctional situations by giving healthy information to our at-risk population. Dr. Abdur-Rahman’s book also provides preventive ideas for professionals working in the field of delinquency prevention.

Grunenwald, Jill.  Reading Behind Bars.  July 2019. Skyhorse.  Paperback  $25.99.  360 pages.  9781510737068.  New Adults and Older.  In this personal narrative of her first year job experience as a certified librarian in a an Ohio men’s prison, Graunenwald makes you sometimes laugh and other times think deeply about the humanity of those patrons who live behind bars. As she adapted to the security measures for the new lockup environment she worked in, she grew into a better understanding of how libraries offered a brief escape for those in lockup which was neutral, open for access, and free of the rigors of life on the cell block.

Kotlowitz, Alex. American Summer:  Love and Death in Chicago.  Nan A. Talese.  Hardback  $27.95.  304 pages.  9780385538800.  Adults.   In 2018 there were 2948 shooting victims in Chicago. The book looks into the ongoing epidemic of senseless shootings in urban Chicago. Kotlowitz does a great job of gaining the trust of some of the people who are the victims or perpetrators who live in these violent communities which are essentially war zones. After gaining the trust of these residents he got an up close look at the psychological toll this dreadful violence has taken on the victims and their families.

Marie, Jozanne.  Beautiful:  Unashamed & Unafraid.  April 2019.  Savio Republic. Paperback  $18.00.  9781642931204.  New Adults and Older.   This book tells the courageous story about a young lady of Jamaican decent who was experienced sexual assault from the age of 6-16 years of age by her own biological father. It goes in detail why sexual molestation is seldom talked about and how in our society this subject is often treated as taboo. Her nightmare started with her teen mother wanting to kill her when she was a baby; it progressed into her being violated sexually, mentally, and physically by her father; and peeked with her being coerced into having an abortion at age 16. This is a must read book to help others understand how to better sustain the fortitude needed for overcoming the trauma of rape abuse,  how to talk about it openly, and how to forgive in order to heal.

Minor, Cornelius.  We Got This.  November 2018.  Heinemann.  Paperback $25.63.  160 pages.  9780325098142.  Adults.  Educating our students in these drastic times has become more and more difficult. In his book “We Got This,” Minor shines a beacon of hope on the quest to strengthen teacher to student connections. He discusses how to carefully listen to students as the best way to prepare for teaching so as to not  make students feel disenfranchised. This book contains points on equity issues and offers strategies for offsetting inequity. 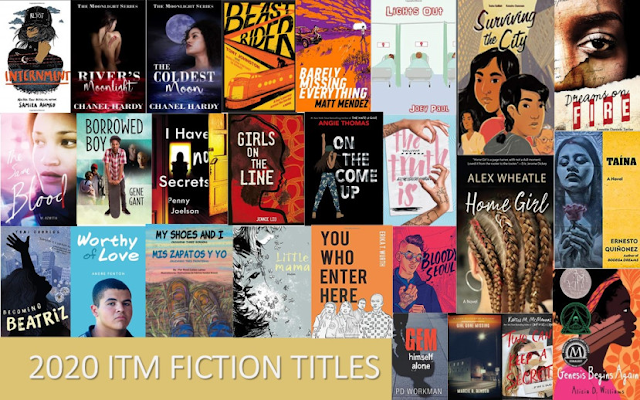 The 2020 committee is comprised of juried and nonjuried members who are librarians and library academics who currently work with youth who experience the challenging circumstances of marginalized issues represented in the selected titles. Members of the 2020 juried committee are:
The complete set of 3 lists is located on the Award Page for the book award website. Click here for new book submissions  and Committee Membership inquiry.
For additional information please contact the committee at inthemarginsbookaward@gmail.com
Posted by Mr. Philly Librarian at 11:11 AM No comments: 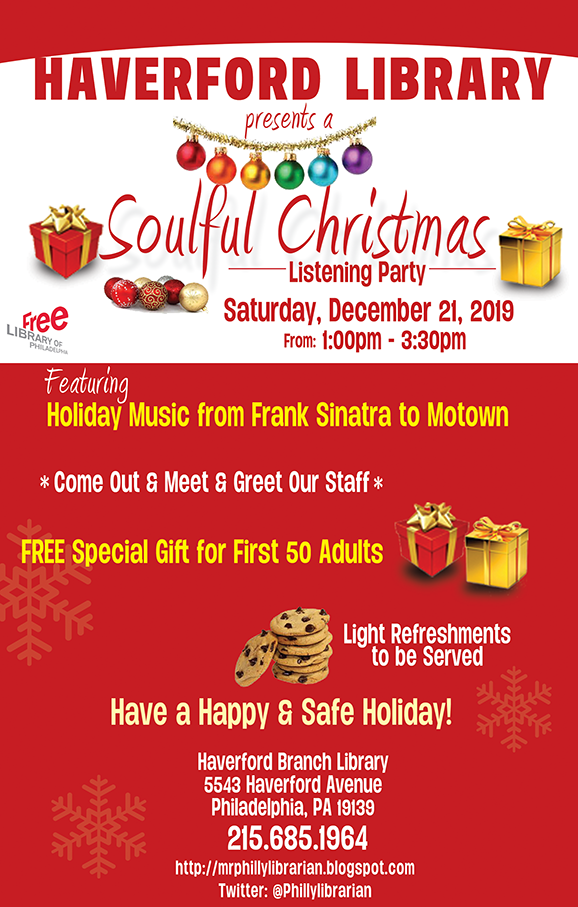 Posted by Mr. Philly Librarian at 6:29 PM No comments:

The Health Department will Also provide FREE Hepatitis A Vaccine

Posted by Mr. Philly Librarian at 12:25 PM No comments: